Photoshop is the worst design tool for APPs, and we are going to explain why.

Yes I know. The word history is boring. But it’s my first post and we are going to do things right! Before I start ranting about the good of Photoshop, I’ll try to put you in context and explain what and how evolution has been.

Photoshop was created 20 years ago by American Knoll brothers. In 1988, a year after its launch, Adobe, seeing the great potential of the program, took over all of its rights.

The first version of Photoshop (Photoshop 1.0) was released in February 1990 exclusively for Macintosh.

Immediately, since its launch, it became the standard tool of the industry in everything related to photo retouching.

The software itself is a Swiss Knife. With it you can do everything from color a photo made in black and white, to design the interface of the most current mobile application. And that’s where the biggest Photoshop problem resides.

The software itself is a Swiss Army Knife. With it you can do everything from color to a photo made in black and white, to design the interface of the most current mobile application. And that’s where the biggest Photoshop problem resides.

Anyone who wants to start designing mobile or web applications and chooses Photoshop as their usual working tool will get a shock when they open it for the first time.

If in its first version the interface of Photoshop itself was already very complex, over the years has not been good at all. The Adobe team has been including and increasing the functionality with a multitude of buttons and options, many of them, unnecessary for us, interface designers, which only distract us and interfere from our final function. That is none other than the design.

As much effort that Adobe has used this last years, with the inclusion of functionalities oriented to web / mobile design, Photoshop was not created with the intention of product design.

Do you know what software was created taking into account the needs of an interface designer? Adobe Fireworks.

-Adobe Fireworks? What do you mean? But that does not exist anymore!

-Okay. Let’s continue with a little history. As I was saying…

Originally launched in 1998 under the name of Macromedia Fireworks, it was born with the idea of facilitating web design and prototyping.

In 2005, Adobe, in a very popular business move, bought Macromedia and the program was renamed Adobe Fireworks.

It was a program based on working with vectors, focused exclusively on facilitating the web design and prototyping.

Anyone who gave it a chance and made the leap from Photoshop or Illustrator / Freehand, did not go back. 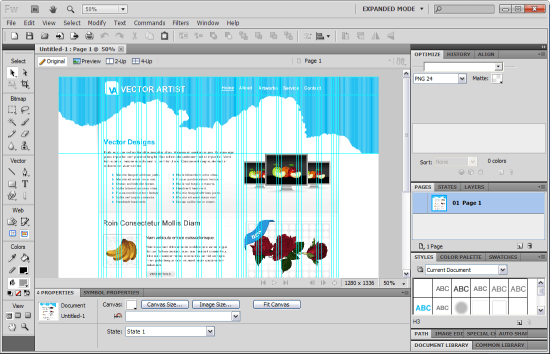 In May 2013, Adobe announced that it would stop the development of Fireworks.

Why did Adobe take this decision?

According to the company itself, because there were functionalities that were stepped between Fireworks and other programs of the Adobe Suite, such as Illustrator or Photoshop. However, in reality, many people complied with a commercial movement, since at that time Adobe announced the birth of its famous Creative Cloud (and its corresponding monthly subscription) in which, of course, would not be Fireworks.

Forcing consumers to move to the new proposal.

Whatever the reason is, what became clear is that this movement of Adobe hurt Fireworks lovers. And a lot.

Suddenly they were lost, abandoned to free will, without a software in which to place their wonderful occurrences.

Yes, they had the option to go back to Photoshop. And even to Illustrator. But they trusted that they needed something better, something purely for them.

Then they began to search … After looking, they realized that they had been blinded for a long time. That a better world is possible.

They encountered a very discreet and simple tool that had been in the shadows developing and evolving little by little to meet the true needs of the designer. That tool is Sketch.

Founded in early 2008 by Bohemian Coding (Pieter Omvlee and Emanuel Sá), it is a design tool vector-based exclusively for Mac. As they comment on their website:

“For beginners and industry professionals alike, Sketch’s powerful, easy-to-use tools allow designers to focus on what they do best: design”

Sketch is focused on providing the designer with their daily chores. Whether related to the web or mobile interface, or user experience.

With a much simpler and cleaner interface than Photoshop and a large community of designers and developers who support it, Sketch is currently and undoubtedly the best choice for designing a desktop or mobile interface.

Advantages of Sketch vs. Photoshop

Sketch is much more intuitive and easy to use than Photoshop.

Its interface is much simpler and the learning curve is low. In just hours you can control the program practically in a 100%.

Whether in terms of file size generated, amount of RAM consumed or amount of space occupied by the installation, Sketch wins in all aspects

The file size of a, sketch file is much smaller than a .PSD.

The RAM consumed by Sketch is tiny compared to Photoshop.

Similarly, while installing Photoshop takes up gigabytes, Sketch, on the other hand, barely reaches 50 megabytes.

Your pocket appreciates it

Sketch has a unique price of 100 € including 1 year of updates.

With a functionality similar to the intelligent objects of Photoshop, there are in Sketch, the so-called Symbols.

If there is an element that we will use more than once throughout the design of the application/web, there is a potential symbol. A symbol will be form of a master symbol and its instances (copies of the symbol).

Not everything is pink

Sketch is not perfect. Like all relatively new software, it has numerous small bugs. Although in their favor, it must be said that, the Bohemian Coding team, are doing the work and respond quickly to them.

Another of the big buts that can blame to the boys of Sketch is that they do not have planned to develop a version for Windows or Linux. Their software is and will be exclusively for Mac computers. Here the Adobe game wins, since all its software is cross-platform.

We do not know if Adobe will regret having killed Fireworks. What is clear is that Sketch has stolen an interesting market share. And Adobe has realized this, so in March of last year, with the intention of shadowing the unstoppable rise of Sketch, launched the beta of Adobe XD.

With a very clean interface and very Sketch style, this tool promises to be the definitive one for prototyping and design. It has very interesting features such as the possibility of adding transitions between the worktables record them and export the result to video format.

This new application from Adobe, has been in beta version for more than a year and constantly receives updates including new and interesting features. With the support of a company like Adobe and aware of past mistakes, it is clear that it is an application to take into account in the near future.

Design in the cloud

But things doesn’t end here… When everything points to the main actors are going to be Sketch and Adobe XD, appears on the scene a third guest.

Currently everything is in the cloud. It is a fact. Our text documents, thanks to services like Google Docs, are in the cloud; Our firm, with the use of products such as viafirma fortress, is in the cloud

And design? Why is not the design in the cloud? With the tools discussed so far, you had to install the software on your computer.

Is there a tool that approaches the design in the cloud? Yes, friends. I have the pleasure of introducing you to Figma.

With the philosophy of design whenever and wherever you want, without the need to install a desktop application, from your own web browser, and with a minimalist interface, very Sketch style, appears with the intention of making a hole in this hard competition.

In addition, it allows the collaboration in the matter of the design. With its free plan, we can be working 2 people on the same project simultaneously. Undoubtedly, although they are still in beta, it is a very interesting and attractive tool to take into account in watching their evolution.

I hope that all the details given have served to have an overview of the current state of the main design tools that are struggling to share the cake.

Changing your usual work tool is an important step, not easy to take, but you never have to be afraid to take the step, due to it may be that the change will surely bring many positive improvements.

A year ago, in the design team of the viavansi group, we migrated from Photoshop to Sketch. The change has been very well received by our developers, because, with the support of tools like Zeplin, it facilitates us very much the communication and productivity by both teams which have multiplied.

Those times were left behind when we had to prepare the PSD for them to inspect each layer in search of the text size of that title, color code used in that button, and so on.

Don’t be afraid to say Goodbye to Photoshop

What is Biometrics? Concept and Trends in Mobility 7 uses of the digital signature, beyond filing taxes.