For today’s society, mobility is something very precious and has become an key element in the advances of technology. As we did last year, and knowing the importance it has today, we analyze the trends in mobility in browsers, search motors and operative systems so far this year 2017 and we see how it has evolved in relation to the same period of last year. Let’s start!

Last year we analyzed the trends in mobility that had taken place in terms of the uses of operative systems, browsers and search motors on desktop, mobile and tablet computers.

Today, after holidays and with a quarter to end the year, we want to know how the growth trends in these areas are, for which we will compare with the data obtained in the same period of the previous year (from January to September) .

What we can advance is that the changes will continue in 2018, where mobile devices will continue to increase their strength in the market in comparison to desktop computers.

According to the Ditrendia, report, for next year the number of mobile users will reach 5.59 MM (being 2.73 MM of smartphones). As part of mobility, tablets will also increase their presence. What happens to that increase in the use of mobile devices? That data traffic will triple in the coming years.

For all the companies that dedicate their activity to provide solutions related to mobility, as in our case-Viafirma Documents and Viafirma Inbox  are two of our star products for this purpose-, knowing all this data and market trends is very important in order to adapt our solutions to the needs and tools that our users have.

Following we show you this data trends in mobility, obtained from the NetMarketShare.

Most used browsers on desktops

As we can see, Chrome is the undisputed leader, with 60% of market share. In general, all browsers maintain a stable trend in the analyzed period of 2017, although Internet Explorer is showing a negative trend.

In the chart below we see the same situation applied on the period of 2016. We realize that, Internet Explorer was the leader until March, where it began to fall. Due to the stable trend of other browsers (Firefox, Edge, Safari), we can assume that all users who were losing Internet Explorer Chrome was wining out.

Most used browsers on mobile devices

In the case of mobile devices, Internet Explorer has an irrelevant use, and Chrome is still the most used browser, with almost 60%. Follow by Safari, Android Browser, Opera Mini and Firefox. How were the same statistics a year ago?

The most drastic change is seen a year ago, Internet Explorer appears in the statistics, although with very little use. We have confirmed that Chrome is the main leader in terms of search engines, ensuring in 2017 the exponential growth of 2016.

Following, we leave the browsers to analyze the mobility trends of the Operating Systems from the period January-September 2017 in desks and mobile devices, comparing the data with those of the same period of 2016.

Operating systems most used in desks

On desktop computers, Windows is the one that leads the ranking of the most used operating systems with approximately 90% of the market share. Second, we have Apple with Mac, with just over 5% of users. They are followed by Linux, FreeBSD, OpenBDS, and other posts.

In the chart below we see what happened the previous year. There are no significant differences, since all continue to maintain a very similar percentage of users. Windows, the leader by far.

In regard to mobile devices, Android takes first place (> 60% of users), and iOS the second (<40%). Thus, these two operating systems are currently dominating the market.

This second graph shows the same data, but in 2016, where there are no major differences. What we do notice is that from April 2016 when Android starts to gain ground to iOS

Finally we will analyze the most used search motors from January 2017 to September 2017, and how we all imagined, Google is the leader in both; desktop computers and mobile devices, as well as tablets. We analyze it.

Most Used Search Motors in Desks

According to NetMarketShare, statistics, Google is the leader in relation to search motors, keeping around 80% of the use on desktop computers. Bing, Microsoft’s search motor, ranks second (7%), very tied with Baidu (6%) and Yahoo (5%). 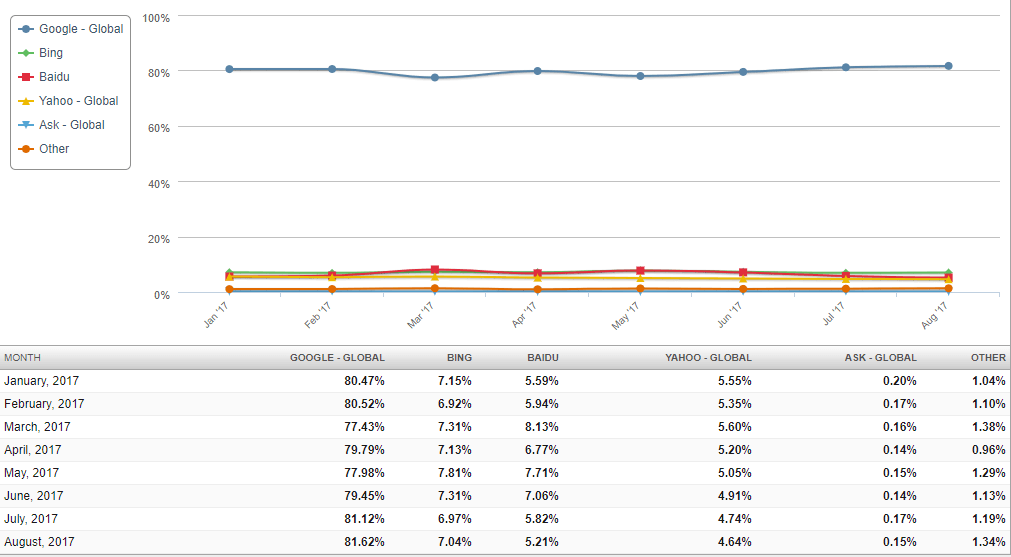 Compared with 2016, Google kept growing until the end of the year, unlike Bing, which suffered a long decrease over the months. 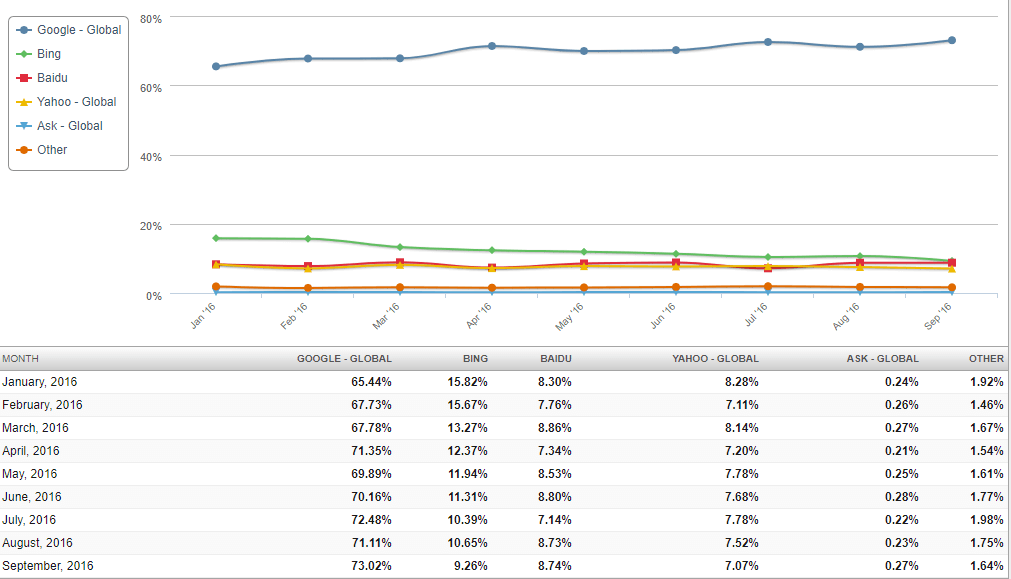 There is no doubt that in mobility, Google tops statistics. It currently occupies 95% of the market. For its part Yahoo Global, Bing, Baidu and Ask remain in their line, with only users.

In comparison with 2016 we can observe a situation almost similar, with the only difference being that Yahoo stood out a little more than other low-use engines.

Throughout this article we have reviewed the evolution during the period from January to September of 2017 of operating systems, browsers and search motors that are a tendency since they are the most used in desktops as mobile devices, which, as we pointed out at the beginning, are very useful for people and organizations that are devoted to the world of mobility.

We hope the above information is useful to you